Little House in the Big Woods

Little House on the Prairie

On the Banks of Plum Creek

By the Shores of Silver Lake

Little Town on the Prairie

On the Way Home 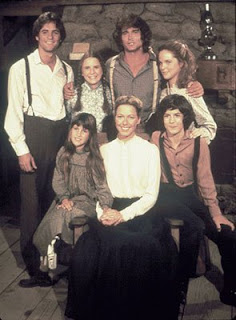 Charles peered through the front window, frost clinging to the edges of the window pane. Laura, Carrie, Albert, and Almanzo chased each other around the yard, scooping up handfuls of heavy, wet snow and hurling them at each other.

A vision of a young Half-pint, braids bouncing beneath her woolen cap as she ran around the front yard in the snow with her sisters flashed through Charles’s mind.  Where had the time gone?

Caroline’s gentle hand cupped his shoulder. “Seems like only yesterday Mary, Laura, and Carrie were having snowball fights of their own.” Her breath tickled his ear.

“Are you reading my mind again, Mrs. Ingalls?”

Caroline’s arms encircled his waist and she leaned her head on his shoulder. “No, just your face, Mr. Ingalls.”

Outside, Almanzo caught up with Laura, who had just nailed his shoulder with a large snowball that splattered across the back of his coat. He grabbed her around the middle and puller her into him, her giggles filtering through the glass into the house. Almanzo nuzzled her neck and her arms wrapped around him as she turned sideways for a kiss.

Charles’s heart ached as he watched them. They reminded him of many years ago when he and Caroline had been a young couple in love. But, more than that, he realized at this time next year Laura would no longer live in the little house on Plum Creek. She would celebrate her first Christmas with her new husband in a little house of her own. He sighed.

Caroline’s arms squeezed around his middle. “It will be strange without her.”

Charles nodded. “We learned to do it with Mary, and we’ll get used to Half-pint being gone too.” Caroline lifted her head and gazed at his profile, one corner of her mouth pulling into a smirk. “Though it might take a bit longer this time.”

Charles turned to face his wife. “At least I still have my favorite lady.” His lips captured hers for a tender moment.

“Laura chose a wonderful man… just like I did.”

Charles couldn’t argue with that. It surprised him how much he warmed up to Almanzo since Laura’s engagement. After all the help Almanzo had given Mary and Adam with the blind school, risking his own life to help out a family he owed nothing to, Charles was certain there was no man in Walnut Grove he would rather have as Laura’s husband.

The front door flew open and four giggling, breathless people marched inside, the ruckus waking Grace from her nap.

“Warm yourselves by the fire,” said Caroline before disappearing into the bedroom.

Charles watched Almanzo help Laura out of her winter coat before removing his own things. “There’s some coffee on the stove.”

“Thank ya, sir.” Almanzo strolled into the kitchen and poured a cup of coffee for Laura and himself.

“Hey Laura,” Albert poked his sister’s side, “is Almanzo going to wait on you in your home too?”

“Don’t talk about Laura leaving,” Carrie whimpered from where she stood in front of the fireplace, rubbing warmth back into her hands.

Laura ran to her sister and hugged her tightly. “Oh, Carrie, it will be all right.” Laura rocked her sister back and forth.

Almanzo’s boots clomped across the floor. “Laura’s right.” Carrie’s tear-streaked face glanced up at him. “We’ll be living right outside town, and we’ll probably be here all the time.”

“Oh great! Just when I thought I would be getting some peace and quiet up in the loft.” Albert smiled at his sister, but Charles saw the sadness hiding in his eyes.

Albert and Laura had been nearly inseparable since the Ingalls family moved back to Walnut Grove. Having left town when times were tough and settling in Winoka, in , the Ingalls family had stumbled upon Albert, an orphan living on the streets. The boy had instantly won their hearts. When the Ingalls family packed up to return home, they asked Albert to come with them.

Adopting Albert had legally secured his place in the Ingalls family, but even without the adoption, he was like their flesh and blood. Laura and he couldn’t have been closer if they truly were brother and sister.

Laura planted a hand on one hip. “You best remember who grades your papersm little brother.”

“How can you call him your little brother when he’s taller than you?” asked Carrie.

The room erupted with laughter as Caroline entered the room with Grace leaning against her hip.

Caroline placed Grace in her highchair while the others pulled out chairs to sit down at the table. “Dinner is almost ready.” She strolled to the stove and lifted the cover of the pot. Breathing in deeply, she smiled and then stirred the contents with a spoon.

Carrie sat down opposite Laura, her eyes still blinking back the tears that swam in her eyes. Laura reached across the table. Carrie’s outstretched arms met her halfway and Laura squeezed her sister’s hands.

“Once we’re settled in the new place,” said Laura, “you can come over as often as you like.”

“Sure. You can even sleep over… as long as it’s okay with Ma and ”

Carrie’s eyes widened and her smile revealed a mouth with a few missing teeth. “I’d like that.”

Charles rapped his knuckles on the table. “If you ladies are done talking about leaving, I’m starving.”

His eyes twinkled and he cast a wink in Laura’s direction, but shifted in his seat, the pain of Laura’s imminent departure still tugging at his heart.

Caroline placed the last plate of food on the table and sat down. The chatter stopped and everyone bowed their heads. As Charles began to thank the Lord for the bounty of food, he risked a glance at his beloved daughter and her betrothed. They had such dreams and plans that he couldn’t help but be taken in by all the excitement, but he knew it would be hard to let her go, even to a man who had earned his admiration and respect.

Before ending his prayer, Charles paused for a moment to silently ask the Lord to give him strength as Laura graduated from daughter to wife; just as he prayed for the courage to leave Mary behind in Winoka, where he would no longer be able to protect her. Caroline and he had prepared their daughters well, but that did not ease his desire to keep Laura from all the heartbreaks he knew would come to her as a farmer’s wife.

Caroline’s gentle smile met his face, as if, again, she knew his thoughts. “They’ll be fine,” her eyes seem to say.

Charles swallowed away the lump that had formed in his throat. “Amen.”

The conversation immediately picked up where it had left off and plates passed around the table. Charles’s heart swelled with pride when his eyes took in his family and Almanzo, who sat between him and Laura. He had gotten used to seeing Almanzo around the dinner table, and the nights the young man wasn’t with them, Charles felt something wasn’t quite right, as if the family could no longer be complete without him.

Charles said one more silent prayer before digging into his plate of food. Thank you, Lord, for blessing Laura with such a special man. Amen.